Living here in Thailand for some weeks, I’ve heard the locals talking about this public holiday called Songkran. People here keep asking me about my plans for Songkran and it seems to be something bigger than a random public holiday which is why I started researching it…
What I generally knew about Songkran is that it is some kind of New Years’ celebration, combined with lots of water splashing, but what it really behind this tradition?
Some historic background…
The celebration of Songkran spread across Thailand in the 20th century. It is assumed that it was brought here by the Burmese, who themselves adapted it from the Indian Holy festival. “Holy” was derived from an earlier ritual meant to bring about a good harvest and fertility of the land,  naturally the Hindus incorporated this as their religion formed.  So because the roots of Songkran seem to come from the northern neighboring countries, it is celebrated more traditionally in those regions such as Chiang Mai.

Originally the New Year (Songkran) was calculated astrologically and with the lunar calendar, to be dated around mid April (the hottest time of the year). The meaning of the word “Songkran” is ”a move or change in the position of the sun from Aries to Taurus” which was generally between April 10 and 18. After 1888 (2431 by the Buddhist calander) the New Year was fixed to the date of April 1 and after 1940 January 1 became the official New Year. But Songkran is still a public holiday and celebrated between April 13 and April 15. The 13th is called “Mahasongkran” which is basically the preparation of the beginning of the New Year, which is used to clean. The second day of celebration namely “Nao” is the old Thai New Year’s Eve (now Dec 31). At the 14th one can observe more formal Buddhist rituals including temple visits. The last official day of Songkran called “Talueng Sok” is then the actual New Year.
Now, why was Songkran celebrated?
The holiday marks not only the start of the New Year but also to honors water itself, which gives life to agriculture in Southeast Asia. The religious significance to Buddhism mirrors the deification of the harvest festival just as in many other religions. Songkran is similar to the Pagan solstice, the Chinese Ching Ming, the Christian Easter and, as mentioned, to the Indian Holy festival (all calculated with solar- and lunar calendar).

The New Years’ celebration symbolizes time for cleaning and renewal. This is why in many households it is the tradition to clean the whole house for Songkran. Tradiotionally, statues of the Buddah were dowsed in water and what remained was considered blessed water which again was used to honor older family and community members. The water is poured over shoulders and hands, sometimes flavored with herbs, it demonstrates washing away negative things from the past year and is said to bring luck and prosperity. Over the years the religious meaning has diminished in importance and fun, water-throwing activities together with alcohol consumption are predominant during the last dry and hot days of the season.
Songkran as a farang… Just because you are a tourist you will be sparedfrom the festivities. Foreigners are favored victims for water blaster attacks. So get prepared to get really wet and protect your technical gear wisely. And most important don’t forget to buy yourself a water gun before going out on the streets. 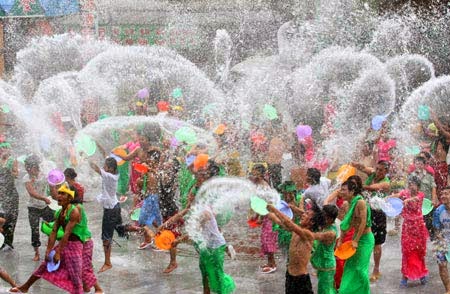 Not only is it customary to splash freezing cold water but also to throw colored talcom powder around, so the streets and people are covered in many different colors.
While in the northern provinces Songkran is often celebrated for almost a week, in the southern regions (such as in Khao Sok) the parade is only one day and may be a bit of festivities on the 14th and 15th.
Full of mirth, color and heavy drinking, Songkran is responsible for many car accidents in southern thailand, so watch out if you are driving. It is also the longest public holiday in Thailand.
Those who want to enjoy bigger and ostentatious Songkran festivities with parades lasting for 3days or longer should definitely go to the northern part of Thailand to the bigger cities.
If you are looking for a quieter experience and an “off the beaten tourist track” visit our local adventure site or make yourself comfortable in one of the cozy floating bungalows at Chiew Lan Lake.
Sooo, I hope now you all know more about Songkran as well and you can get prepared!
I wish you a Happy Songkran (suk san wan Songkran) or what you can also say a Happy New Year (Sawatdi pi mai).