An Exclusive Look at Scientific Research on Wildlife in Thailand

We were invited to follow along on a scientific research trip to the farthest reaches of Khao Sok lake… and beyond!  The goal: collect 61 camera traps, visit 12 islands, and hike six animal trails along remote ridgetops and valleys in 8 days, covering nearly 100 km by foot through rough terrain in the rainy season.  Here’s what I found joining for 4 days searching for wildlife in Thailand:

Day 1: We all meet up, board a week’s worth of supplies on the boat, and begin our day’s work. For me, it’s also a chance to spend time with an old friend, Pi Road, who is the boat driver for this expedition, known for his wealth of knowledge of the lake and wildlife in Thailand.

For today, we’re splitting into two groups: one going over a ridge along the Saeng River ending at the rafthouse where we’ll be staying tonight; the other collecting camera traps from several different islands. I stayed in the boat with Road and Jasdev, a field researcher currently working in Malaysia, to go by boat. The rain made the collecting slow-going, even for the short trips to collect traps from the islands.

We make it back as the light is fading so that Road can set up our makeshift kitchen for the next few days. As the night falls, the other group of Luke, Alex (a grad student at Mahidol University in Bangkok) and Grom (a long-time ranger who regularly walks these deep jungle trails) still hasn’t returned. Road indicates where they’ll be coming out and asks us to watch for their return. Just as I tell Jasdev I’m beginning to worry, we notice the beam of a headlight emerging from the opposite bank. 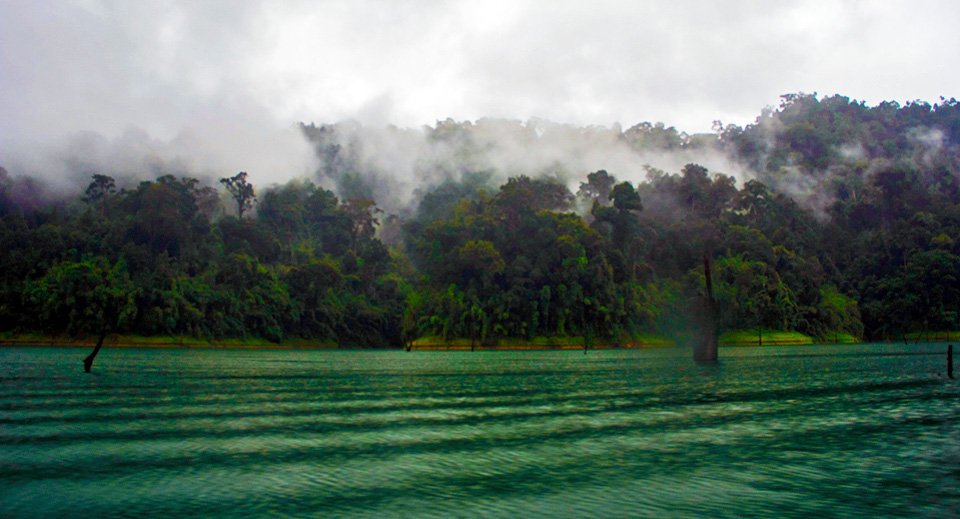 Covered in rain and mud, they explain the state of the trail held them back and caused them to miss the last camera trap. Their combination of exhaustion and frustration is pretty easy to see, but it to eases away after a shower and a hot meal together. We cover interesting topics, such as proper form for sitting in a hammock, who would try eating a leech for the least amount of money, and everyone’s scariest wildlife encounters. My dream of meeting elephants in the wild slowly becomes a phobia.

Day 2: We pile on to the boat the next morning to start our trip to the mouth of Klong Saeng, at the farthest edge of the lake. At full speed from several meters away, Road somehow spots a pregnant fish whose eggs have caused her to float upside down.  Then, he has the skills to stop the boat right alongside the fish and catch it with his bare hands.  The man is a wizard! 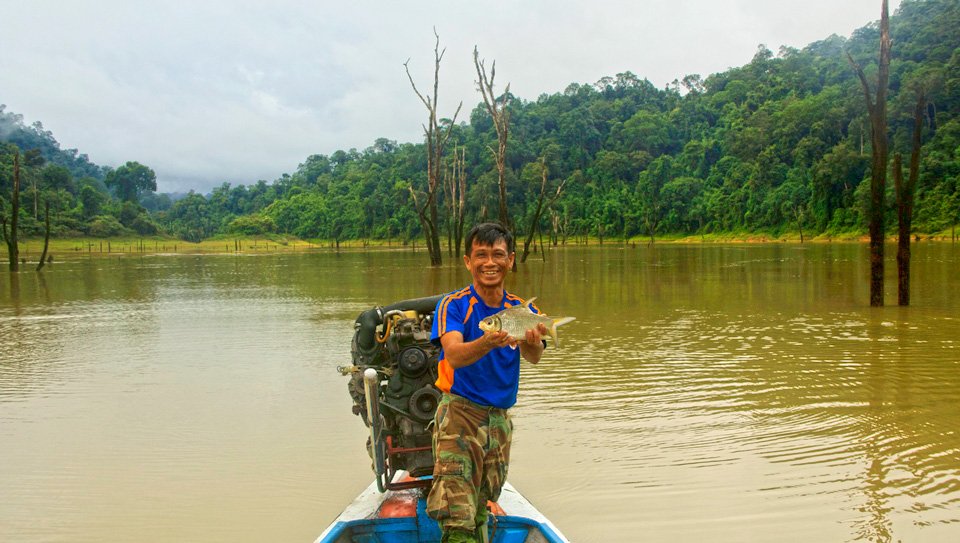 Once we’re on the trail, we’re greeted with a parade of downpours throughout our hike.  The one positive: Dr. Gibson has no trouble finding plenty of new specimens for his research collection of leeches.  I won the leech collecting contest, with nearly 50 bites all over my body.  The days of itching in all kinds of strange and exotic places was quite the souvenir. 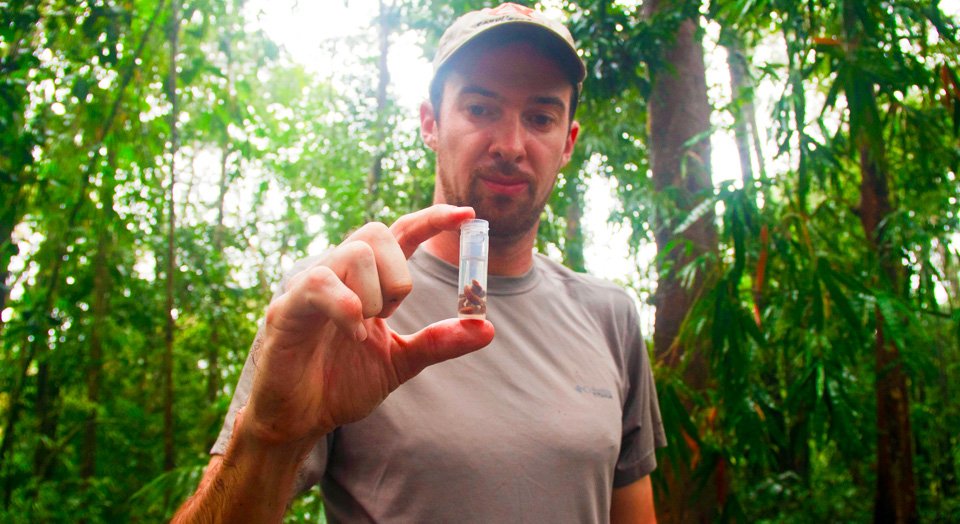 Even though the weather wasn’t ideal for wildlife spotting, we still had a bit of good luck.  Aside from the armies of leeches trying to bite us, we saw several birds and snakes throughout the day, including a brief glimpse of the world’s largest pheasant, the Great Argus.  Toward the end of our hike, we ran into an Asian Brown Tortoise. 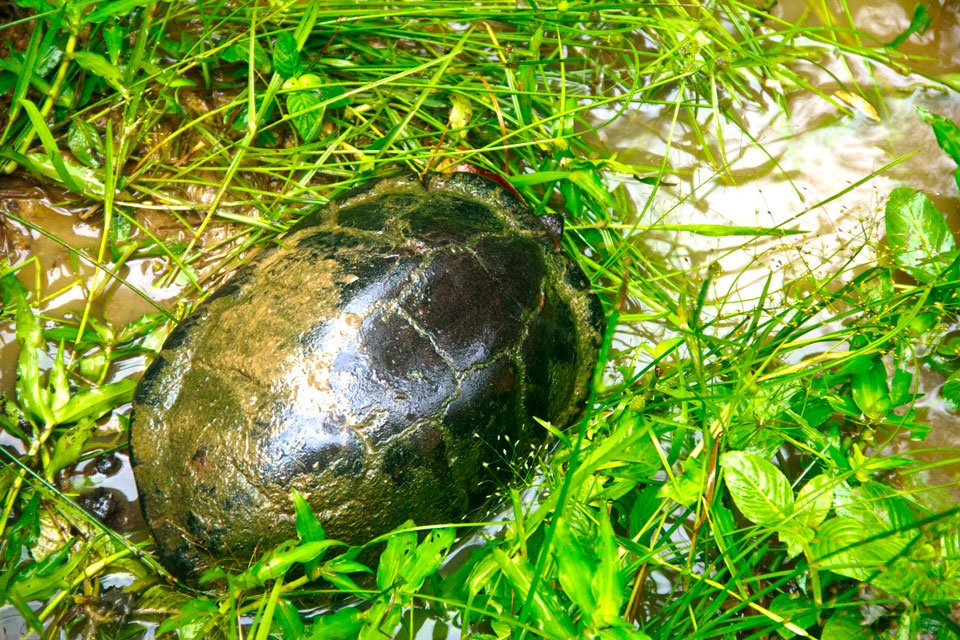 Day 3: We woke up the next morning to one of the most amazing mist displays I’ve ever seen.  The lake is known for its beautiful, misty mornings, but this was… well, see for yourself. 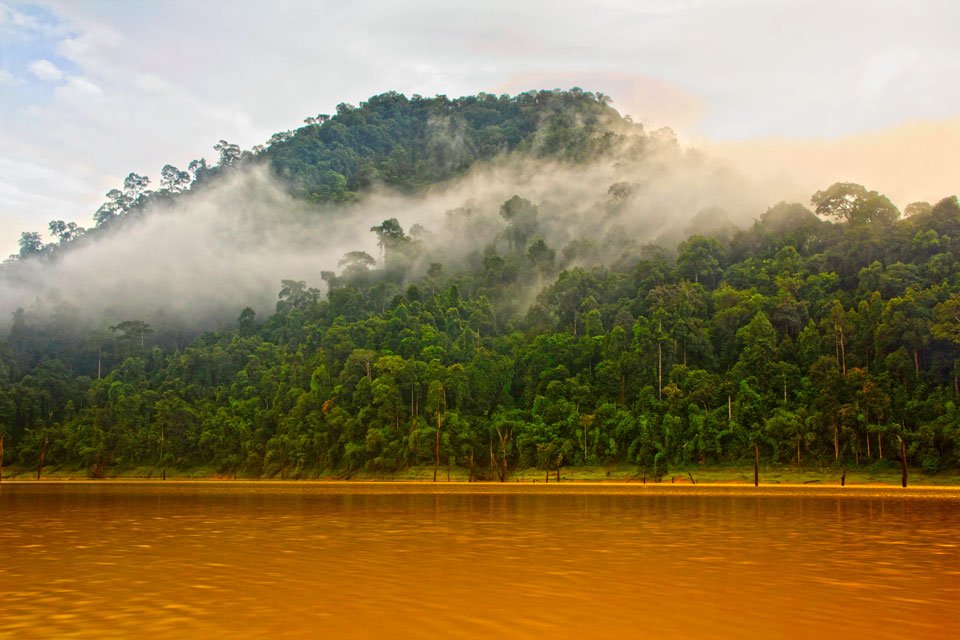 To top this all off, we got word from one of the rangers that there was an elephant out getting some water along the neighboring banks.  Even I was able to spot this one from far away, and luckily, we were able to watch it from the boat at a safe distance. 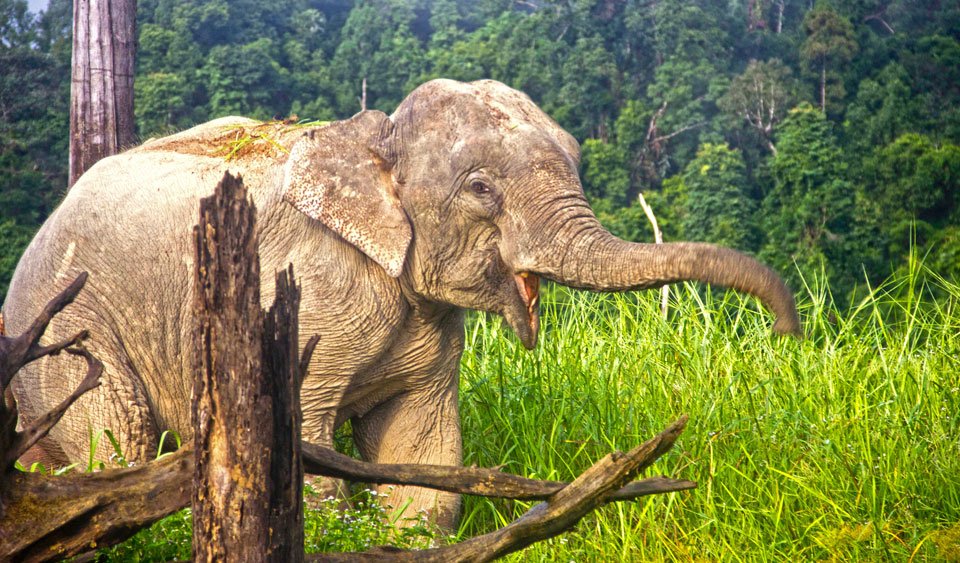 Today, we had the benefit of good weather throughout most of the day.  We spent the morning collecting from another valley near the edge of Klong Saeng and spent the afternoon picking up the traps we missed from the first day.  We even ran into a family of wild pigs, which quickly dispersed upon smelling us. 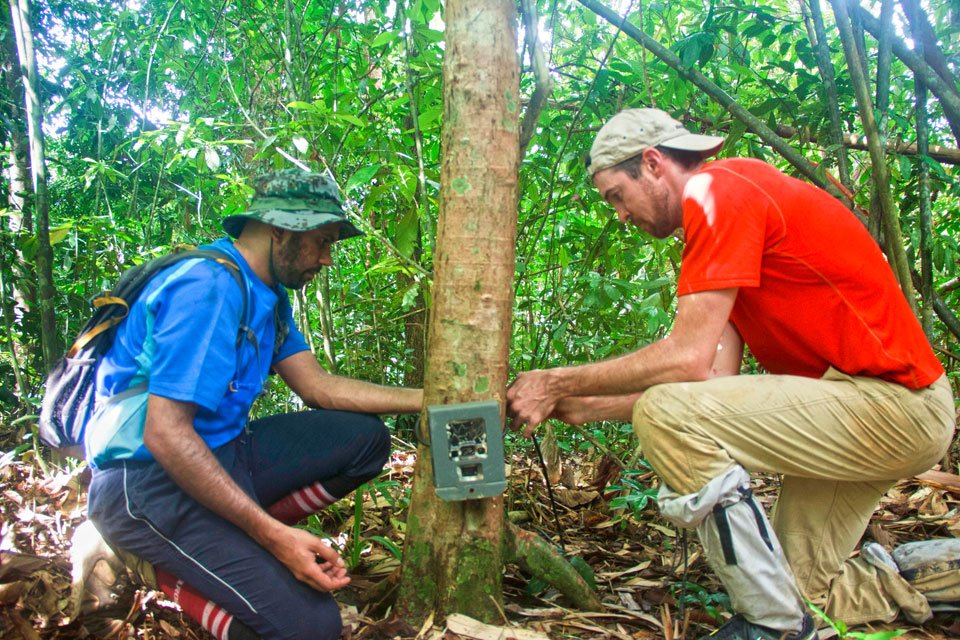 Klong Saeng is unique from the other areas of the lake because of its transition from disturbed flooded forest back to undisturbed riverine forest.  It is easy to see why this place is a sanctuary for wildlife in Thailand: Khao Sok lake has undisturbed habitat, like buffalo grass, that is rarely seen nowadays.  Most of it was flooded by the creation of the dam inside the park and converted for agriculture outside of the park.  Back here, the forest, and the wildlife, are both alive and well. 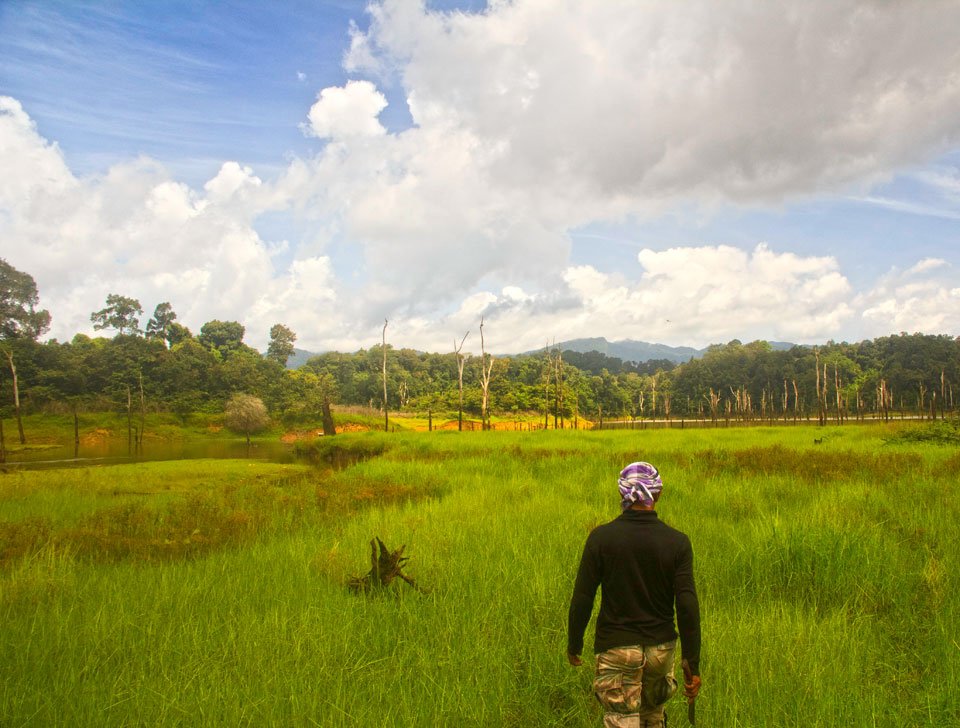 When we got to the last trap of the day, we had a nice surprise waiting for us.  Scorpions.  Cute, cuddly, baby scorpions. 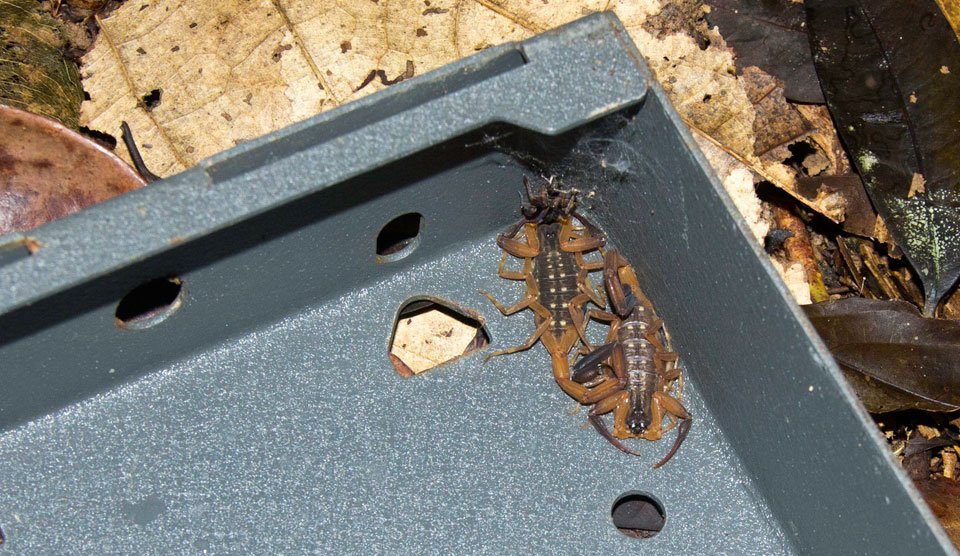 The day ended with a heavy storm, which we watched pass from a floating supply shop tucked away in it’s own small bay.  We were ready for a beer and a nap.  Some of us more than others. 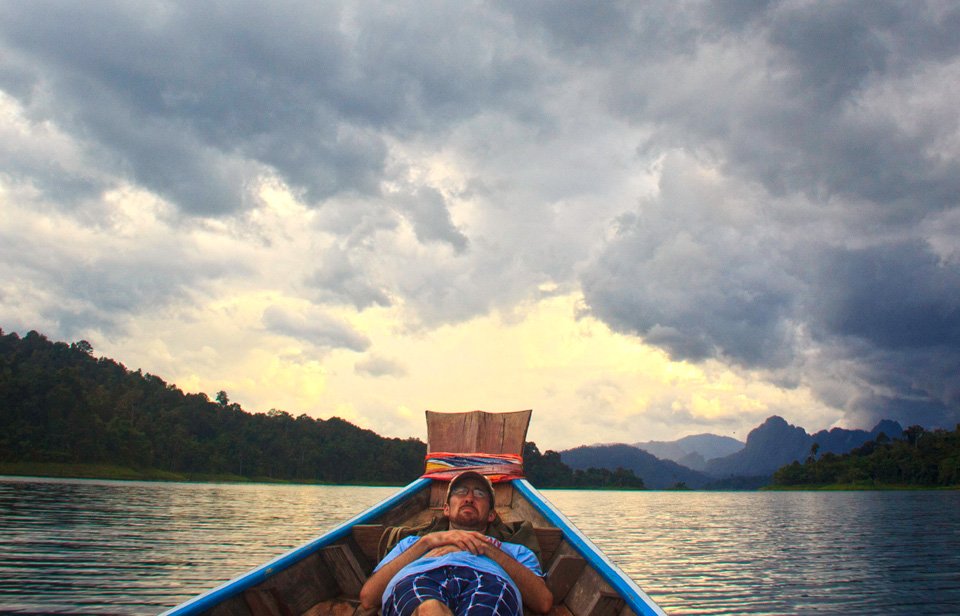 Day 4: The group was slowly dissolving: Last night, Grom had leave to for Khao Yai National Park for a conservation management meeting among national park officials and Alex also had to make his way back up to school in Bangkok.  For Luke, Road and Jasdev, nature called.  For me, the working world called.  Emails, emails, and of course, cooking up an excuse to get out into the jungle again.  While Luke and Jasdev went off to do more hiking and camping, I went off to do some inbox management, and of course look at all the cool photos I had the chance to take while out on the lake. 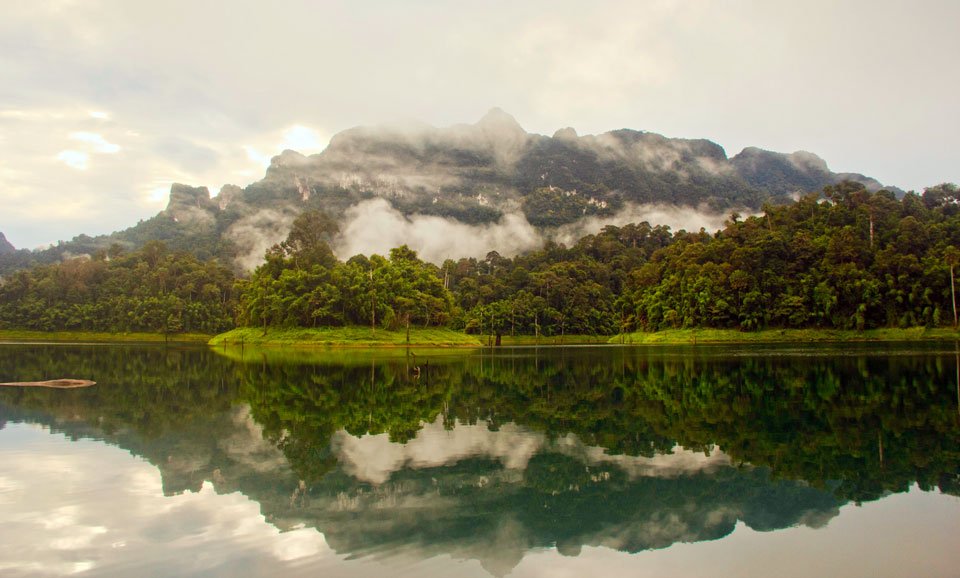