Has the Military coup affected tourism in Thailand?

We have written this blog to inform travelers on the burning question: has the military coup  affected tourism in Thailand?

In order to understand the current measures taken by the Thai Military and the resulting consequences we have to let’s look at some of the key recent events:

So with no Government in place and a lot of failure and corruption in the background ,Thailand’s army chief Gen Prayuth Chan-ocha took over public safety on May 22th,announcing martial law in order to stabilize the current situation after the political unrests. The global reaction followed on pace, more than 40 countries have issued travel alerts, including the U.S. and Hong Kong, which have advised citizens to avoid non-essential travel to Thailand.This made some of the travelers coming to Thailand quite happy because this lack of demand decreases the overall prices and tourists the value of foreign currency increased. A lot of tourists prove this statement posting pictures from crystal clear waters and empty beaches, What Coup? 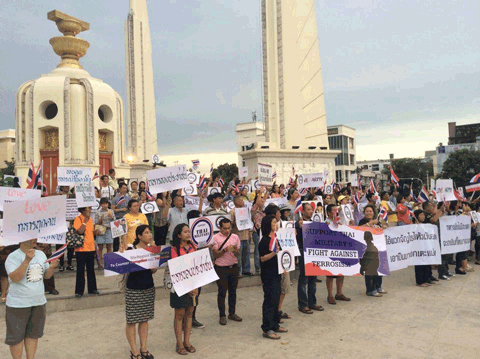 Thailand’s way forward is not an easy one. The democratic election has yet to beannounced, and the different political parties must be brought together regainthe overall social stability. Thailand has had a lot of political problems in the past and most citizens believe this “coup” will be instrumental in returning the country to legitimate democracy. In terms of tourism, the Thai population is not nearly as bad as the foreign press releases make it sound. It’s citizens are well accustomed to political unrests and crises and well aware of how to cope with them (it is the 12th military coup since 1932). Thailand’s citizens know better than to threaten or interfere with visitors as more than 16.7% of National income is driven by tourism. In more rural areas, the coup has not been felt by residents at all. The worst thing that happened in Ta Khun was that the 7/11 closed down at 10 p.m.! Taxis, Busses, Trains, and tour companies continue to run with reasonable punctuality (considering it’s Thailand!) and there seems to be a general feeling of hope as most of the locals seem to be feeling positive about changes in their government.All of this said, there have been surprisingly few consequences to traveling foreigners:
Consequences of the curfew
Contrary to what you may have heard:
A recent political cartoon says it better than we could: 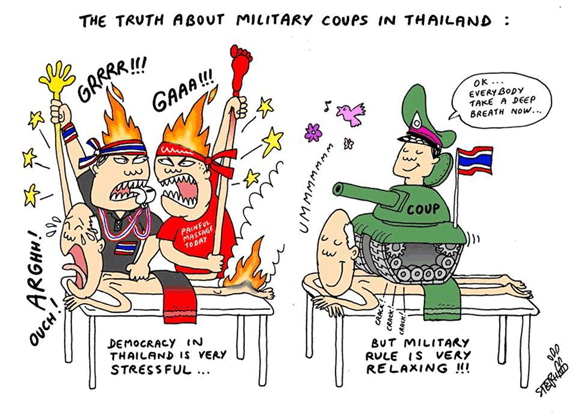