“Time flies” as the old saying goes, and this past month has been no different. It’s hard to believe that we are already halfway through the course. There is so much that the guides still need to learn. But having said that, there is so much that they have already learnt.  The month of May has seen a mixed response from the trainees in the various groups but all in all it’s been a positive month.

Quite early on we lost the trainees from the canoe operator in Khao Sok. It’s hard to know exactly why this was the case but all we know is that for whatever reason or reasons they never really seemed fully committed at any stage of the process. It’s a shame because there is a real need for canoe guides in Khao Sok that speak English, and it was hoped that these guys could have been the ones.

Progress has been quite slow at the lake amongst the trainees there. Like with the canoe guides, some of this group doesn’t seem to be taking it very seriously, only showing up about half of the time, and even when they do they are often exceptionally late. Not good. There has also been a shortage of practical training due to lack of availability of boats to use. Nonetheless some progress has been made with their English, and a couple of the trainees are showing some real potential. We’ve had a meeting with the organizers there, and it is hoped that a more focused effort will be made next month, and then hopefully these promising trainees might really start to fulfill their potential. 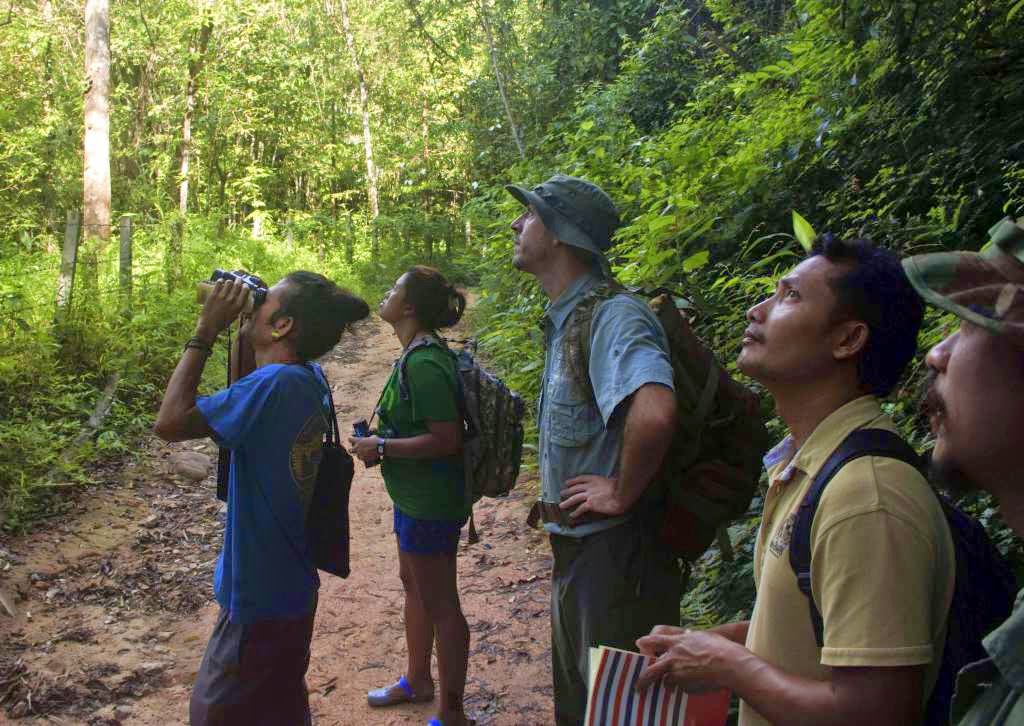 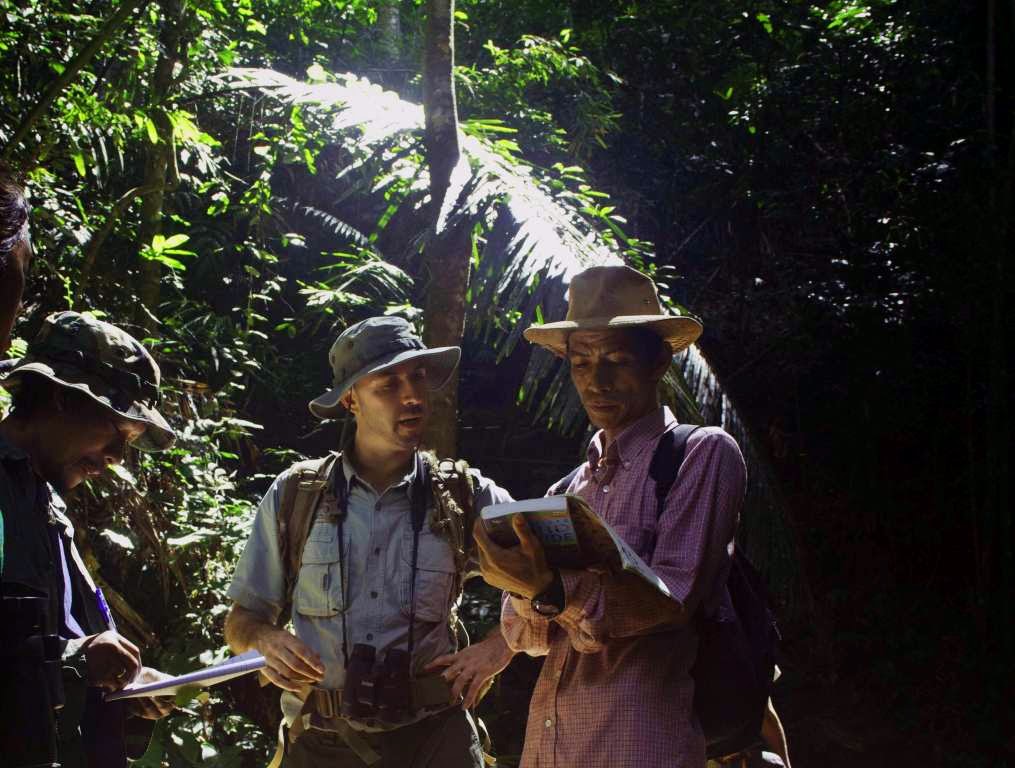 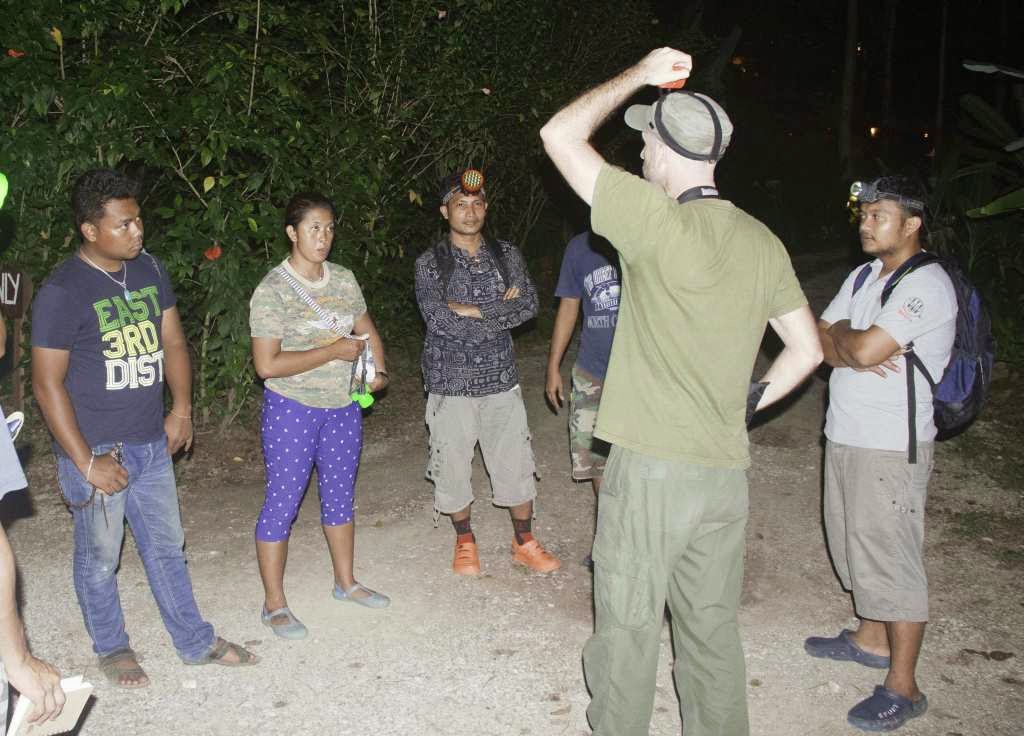 Due to the canoe trainees pulling out it was decided that the two trainees from the kilometre 82 area join up with the group based at the park headquarters. This group has in stark contrast really put in a huge effort, and it has to date paid off. All of the group shows a genuine interest in the training and the subjects they are learning. Attendance is good, they are punctual, and scrupulously take notes every time we are out and about. Two or three of them are making significant steps to becoming good, competent guides, and there are several others that are coming along nicely as well. Now it’s going to be a case of honing their new skills as well as continuing the improvement in their English. The coming month will see them take the lead more often, and get plenty of practice guiding the group themselves instead of relying on the training team to prompt them. Let’s hope the June monsoon rains hold off enough to allow us to continue with the progress already made.

Whilst exploring the wilds of Khao Sok the different groups have had the privilege of some delightful wildlife experiences. During an overnight stay at Krai Sorn raft house the trainees got a memorable encounter with a female gaur and her young calf whilst out kayaking. The following morning dawn boat safari gave them an equally rewarding chance sighting of a Malayan sun bear as it was foraging in amongst the bamboo forest. The night safari gave us glimpses of palm civet, sambar deer, and mousedeer. There have been plenty of sightings of the langur and macaque monkeys and the evocative songs of the gibbons have always been resonating around the valleys.

There have been some special bird encounters as well. Rarely glimpsed species such as banded pitta, hooded pitta, blue-winged pitta, orange-breasted trogon, green broadbill, dusky broadbill, banded kingfisher, rufous-collared kingfisher, maroon woodpecker, and buffy fish owl have all been seen. Sightings of the large raptors and hornbills have been plentiful, including a great hornbill male and female flying about with their recently fledged youngster. There have also been glimpses of some of the snakes too – monocled cobra, mangrove snake, cave racer and Malayan rat snake.

A somber moment came when the group encountered a shy and secretive southern serow whilst out on a walk along one of the trails. This beautiful and rarely seen animal had been caught in a poacher’s snare and had its front left leg trapped in the wire noose. Thankfully we were able to get the national park to come and cut the animal free and so with a bit of luck the animal will be able to make enough of a recovery that the wound will not affect it. Whilst saddening this proved to be an invaluable lesson to the trainees as it helped to reinforce the importance of their role as guardians for these forests. Tourist activity is a key deterrent to poaching activity, and so the more trained and qualified guides we have guiding their guests in the Khao Sok area, the more these endangered and precious animals can enjoy a secure future.